I feel that there is certainly a long way to go in achieving gender equality.  I read that at the current rate, it will take over 100 years to close the gender pay gap and that the pandemic will hold back progress by at least a further 10 years.  That’s staggering.  So I think having IWD puts the spotlight on these issues and even if only for a moment hopefully gives everyone pause to stop and think about what they can do personally to drive forward change. As Fiona said in the post earlier in the week it’s not just about calling out bias when you see it but also highlighting the achievements of women to make other women see what they could also achieve.

I think young women coming into the legal profession now will find a very different landscape to the one that I started my career in 15 (gasp) years ago.  I would want them to know that they can and more importantly should expect to achieve the same as their male counterparts.  I would hope that they should feel comfortable in pushing themselves forward and be confident that ability and hard work will be recognised and appropriately rewarded financially regardless of gender.

I think women who strike out on their own to start their own businesses are so brave.  I have a friend who recently gave up her career in the law and is pursuing a completely different path in a creative industry, and I think she is so brave – I really admire her for having the gumption to do that.

My proudest moment in my career so far is probably when I switched from working as a corporate lawyer to working in private client.  It was very early in my career, and it was definitely a good move for me, but at the time it was terrifying as I really had to start all over again and learn a whole new job, so on reflection I’m pretty proud of myself for that. 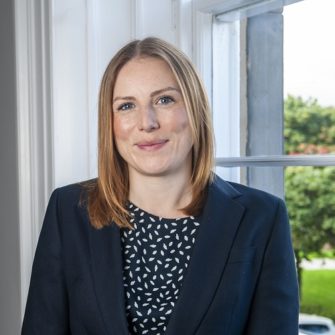